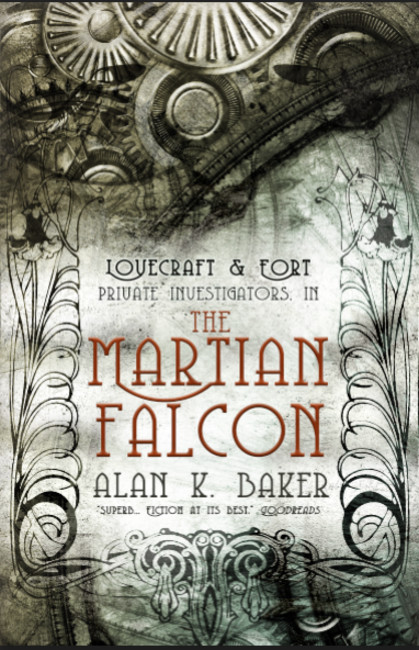 NEW YORK, 1925 A city that never was. A world that never was. At least in our universe… A place where upway trains glide between the skyscrapers and the subway system has long been abandoned to the hideous creatures that dwell beneath the Earth’s surface. A place where Cavorite-powered aircraft soar among the clouds, watched by the sky beasts that inhabit the upper atmosphere. A place where the supernatural is real, and the organised crime of New York is run by Johnny Sanguine, the Vampire King of Brooklyn. Humanity’s first expedition to Mars has ended with the triumphant return of Rocketship X-M, bearing priceless artefacts from a long-dead civilisation. When the obsidian statuette known as the Martian Falcon is stolen from the Metropolitan Museum of Art, Al Capone, the cybernetically-enhanced “Diesel-powered Gangster”, is in the frame for the heist. Capone, however, is innocent (for once), and suspects that the Falcon was stolen by Johnny Sanguine in an effort to move in on his Chicago territory. To prove it, Capone enlists the unwilling help of Charles Fort, private investigator and anomalist. Fort uncovers something far more dangerous than an impending turf war between two gangsters: he uncovers a mystery that stretches back five million years to the destruction of the ancient Martian civilisation, and a timeless evil that could put an end to all life on Earth. One thing’s for certain: Fort has his work cut out trying to prove Capone’s innocence while staying out of the firing line of Sanguine and his vampires. Now may not have been the best time to take on a new research assistant, a struggling writer by the name of H. P. Lovecraft… Welcome to a yesterday that never was. Welcome to the world of LOVECRAFT & FORT PRIVATE INVESTIGATORS