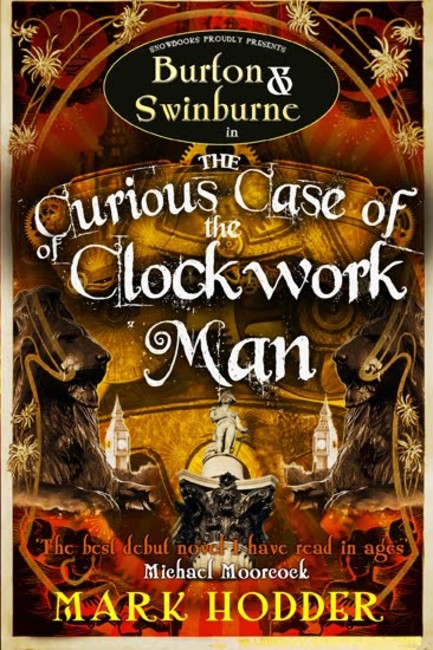 The Curious Case of the Clockwork Man

1862: Albertian Britain is in the grip of conflicting forces. Engineers transform the landscape with bigger, faster, noisier and dirtier technological wonders; Eugenicists develop specialist animals to provide unpaid labour; Libertines oppose restrictive and unjust laws and flood the country with propaganda demanding a society based on beauty and creativity; while The Rakes push the boundaries of human behaviour to the limits with magic, sexuality, drugs and anarchy. “Sir Richard Francis Burton and poet Algernon Swinburne’s investigation into a theft of black diamonds, ultimately embroiling them in the affairs of a dubious claimant, supposedly the heir of a cursed estate...is deliciously entertaining.” -- Steampunk Scholar

"I put off reading my copy of Mark Hodder’s debut novel, The Strange Affair of Spring Heeled Jack until the review copy of its sequel, The Curious Case of the Clockwork Man, arrived. We’re told not to judge a book by its cover, but the covers of many PYR releases, and those by Jon Sullivan in particular, challenge our ability to reserve judgment. The image of a brassy looking automaton drawing a sword-cane to square off against a massive, patchwork-looking figure (a seemingly steampunk Kingpin), surrounded by spectral figures (steam wraiths!) in flight was too much to resist. Accordingly I set to work devouring Spring Heeled Jack, a phenomenal first novel deserving of the recently won Philip K. Dick award. As I said in my review of Spring Heeled Jack, if this is what the “punk” Hodder wants to see steampunk look like, then I say with Oliver Twist, “Please, sir, I want some more.” And more there is. The Curious Case of the Clockwork Man is a worthy successor to Spring Heeled Jack, combining a number of seemingly clichéd steampunk elements in ways that shatter and rebuild them: the combination of industrial and biological sciences ala Westerfeld’s Leviathan; the filthy London of Gibson and Sterling’s Difference Engine, filled with anachronistic innovations; recursive fantasy blending both historical and literary figures as in Newman’s Anno Dracula; the Agent of the Crown, seen in Green’s Pax Britannia series; the labyrinthine schemes of secret societies in Dahlquist’s The Glass Books of the Dream Eaters and Tidhar’s Camera Obscura; multi-threaded plots akin to Powers’ Anubis Gates; and the quirky humor of Blaylock’s Adventures of Langdon St. Ives. Where these predecessors and contemporaries are inferior, Hodder elevates his material, and where they are masters of narrative, he matches them. The story defies summary, but the narrative centers upon Sir Richard Francis Burton and poet Algernon Swinburne’s investigation into a theft of black diamonds, ultimately embroiling them in the affairs of a dubious claimant, supposedly the heir of a cursed estate. As with Anubis Gates, this only scratches the surface of Hodder’s tale, as his secondary world-building is delightfully dense. Readers familiar with nineteenth century will enjoy the numerous changes Hodder has wrought, which take this simple plotline and render it complex. The Curious Case of the Clockwork Man clearly demontrates Hodder’s ability for making the vast elements of his secondary world cohere, live, and breathe, and to do it in a way that is deliciously entertaining." -- Steampunk Scholar

Buy The Curious Case of the Clockwork Man