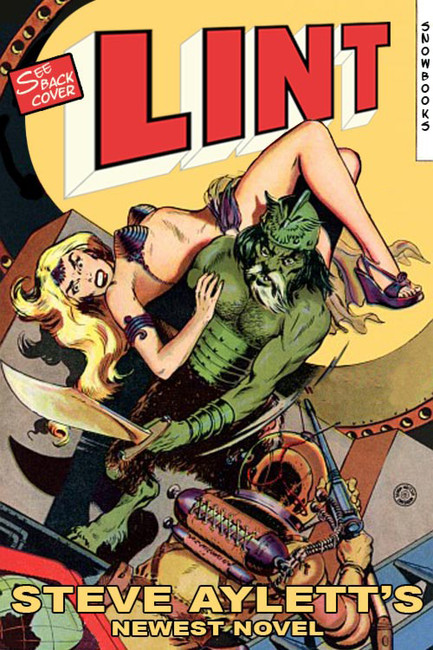 "There was also a problem with the first edition of Rigor Mortis. The biographical notes on the back cover— with the by now inevitable photo of Lint kissing a tortoise— stated that Lint had died in 1972. The media, poised to praise him after his death, sprang in with lamentations that he had been tragically neglected by commercial enterprise and that it was baffling that his artistic genius had not been more appreciated. Their bitter embarrassment upon learning that he was still alive and open to their patronage drove a bigger wedge than ever between the media and Lint— they had no recourse but to pretend he did not exist at all. ‘So in terms of money, publicity and ease of progress,’ Lint observed, ‘all remains the same.’" Jeff Lint was author of some of the strangest and most inventive satirical SF of the twentieth century. He transcended genre in classics such as Jelly Result and The Stupid Conversation, becoming a cult figure and pariah. Like his contemporary Philip K. Dick, he was blithely ahead of his time. Aylett follows Lint through his Beat days; his immersion in pulp SF, psychedelia and resentment; his disastrous scripts for Star Trek and Patton; the controversies of The Caterer comic and the scariest kids' cartoon ever aired; and his belated Hollywood success in the 1990s. It was a career haunted by death, including the undetected death of his agent, the suspicious death of his rival Herzog, and the unshakable "Lint is dead" rumors, which persisted even after his death.

“Lint is like manna from Mars, a jaw-to-the-floor comic masterpiece that will leave you giddy with excitement that it even exists... everyone holding this magazine should own two copies of Lint: one for themselves, one to fling in the face of their nearest foe. *****” -- SFX Magazine “More fun than any other mock author biography on the face of this or any other planet. Smart people should be tortured and shot for not reading Steve Aylett... Aylett crams more ideas into one sentence than you’ll find in all the novels on the New York Times bestseller list put together.” -- Bookmunch “[Aylett] is an unstoppable master of space and time—much like Lint himself.’Scifi.com“an elaborate and unhinged comedy, Lint offers a wide sweep of pulp/junk/underground culture... I love the part about Lint’s JFK conspiracy theory, which posits that the same bullet ricochet killed several presidents.” -- LitKicks “This little book is a gem...What Steve Aylett has done is put together a very odd, sometimes nonsensical, but often laugh-out-loud funny mock biography of a pulp fiction writer who only exists in the author’s imagination. The section on Lint’s failed Star Trek script had me in tears, I was laughing so hard.” -- Estella’s Revenge