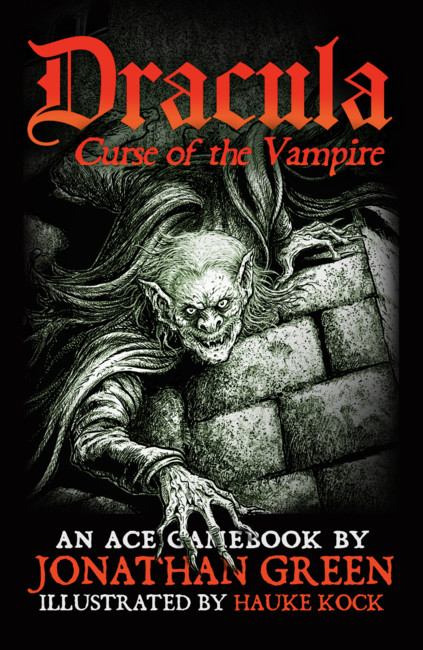 1897 In the wolf-haunted Carpathian Mountains, a young solicitor, Jonathan Harker, travels to an isolated castle to assist a mysterious Count with purchasing a number of properties in England. But what he witnesses there drives him to the edge of madness… Meanwhile, in Whitby, Harker’s fiancée, Mina Murray, visits her dear friend Lucy Westenra. But during her stay, Lucy is attacked and becomes seriously ill… In London, Lucy’s suitor and physician, Dr John Seward, becomes preoccupied with the case of a certain Mr Renfield, an inmate at his lunatic asylum, who seeks to collect lives for his master, having not long returned from a trip to Transylvania… And so the pieces for the game are set. For they are all pawns in a plan devised centuries ago by the Voivod of Wallachia, Vlad Tepes, a cruel tyrant whom history remembers as ‘the Son of the Devil’, his bloodthirsty deeds having earned him another name… Dracula.  * * * * Dracula – Curse of the Vampire is an interactive gothic horror novel, in which YOU decide which route to take, which perils to risk, and which of the terrifying creatures you will meet along the way to fight. Play as Jonathan Harker, Mina Murray and Dr John Seward… or even Count Dracula himself. But be warned – whether you succeed in your quest or succumb to the curse of the vampire will be down to the choices YOU make. But do not tarry, for the dead travel fast.