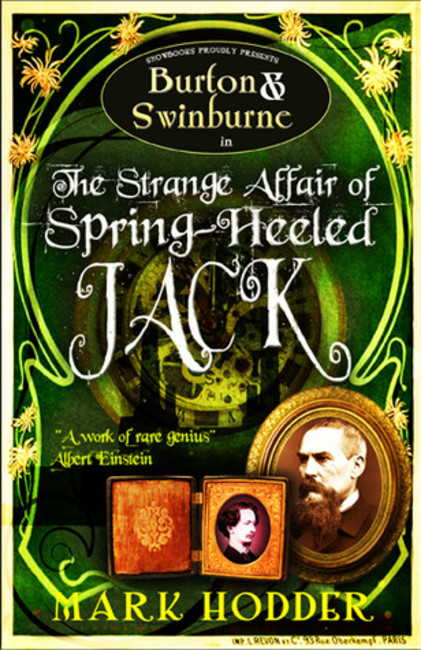 Burton and Swinburne in the Strange Affair of Spring Heeled Jack

It is 1861, and Albertian Britain is in the grip of conflicting forces. Engineers transform the landscape with bigger, faster, noisier and dirtier technological wonders; Eugenicists develop specialist animals to provide unpaid labour; Libertines oppose restrictive and unjust laws and flood the country with propaganda demanding a society based on beauty and creativity; while The Rakes push the boundaries of human behaviour to the limits with magic, sexuality, drugs and anarchy. Returning from his failed expedition to find the source of the Nile, explorer, linguist, scholar and swordsman Sir Richard Francis Burton finds himself sucked into the perilous depths of this moral and ethical vacuum when the Prime Minister, Lord Palmerston, employs him as 'King's Spy'.� His first mission: to investigate the sexual assaults committed by a weird apparition known as Spring Heeled Jack; to find out why chimney sweeps are being kidnapped by half-man, half-dog creatures; and to discover the whereabouts of his badly injured former friend, John Hanning Speke. Accompanied by the diminutive and pain-loving poet, Algernon Swinburne, Burton's investigations lead him back to one of the defining events of the age: the brutal assassination of Queen Victoria in 1840; and the terrifying possibility that the world he inhabits shouldn't exist at all.

"This is an exhilarating romp through a witty combination of 19th century English fact and fiction. Mark Hodder definitely knows his stuff and has given us steam opera at its finest. In this first novel he shows himself to be as clever and inventive a writer as those who enliven his pages. We follow English explorer and eroticist (and King's agent) Sir Richard Francis Burton, poet and Sadean Algernon Charles Swinburne and a cast including Florence Nightingale, Charles Darwin, Francis Galton and Isambard Kingdom Brunel (rather different to those known to our Victorian ancestors) as well as the mysterious albino Laurence Oliphant in an adventure involving the very nature of Time itself in a London filled with steam-horses and velopicides where were-wolves prowl the streets and 'Spring-Heeled Jack', star of the Penny Dreadfuls, might provide the key to an ever-deepening mystery. A great, increasingly complex, plot, fine characters and invention that never flags! It gets better and better, offering clues to some of Victorian London's strangest mysteries. This is the best debut novel I have read in ages." -- Michael Moorcock